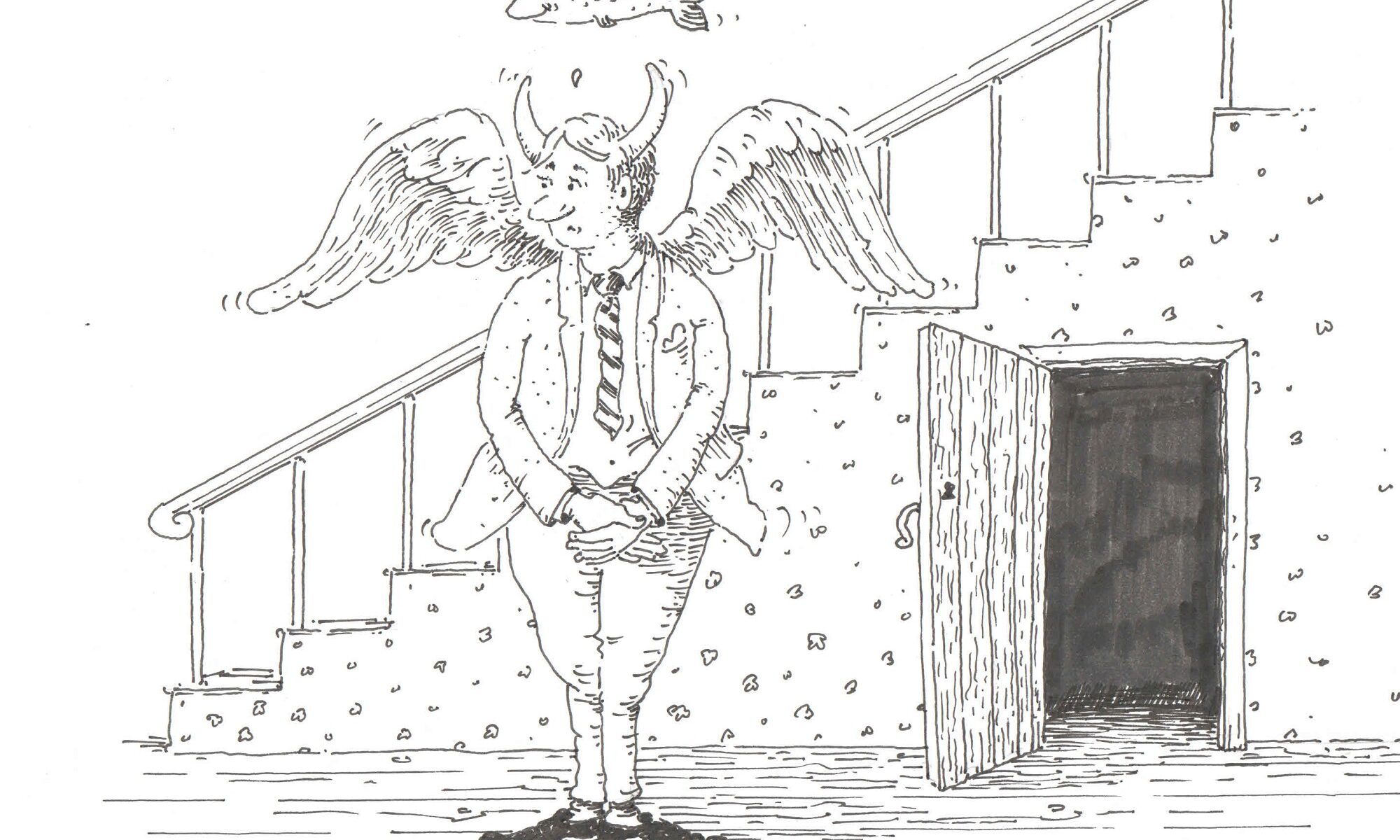 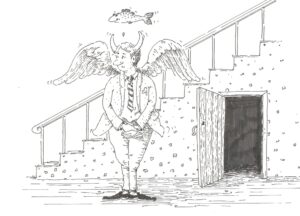 There were once two Englishmen of middling years. The one was wise and patient. He was good at his job and well-liked by almost everyone. Softly spoken, he kept his own council and never got irritated by anything. The other Englishman had the red wings of a dragon and a serpent’s tail and spouted prophecies of doom or argued dogmatically with everyone whenever he got the chance, and when not otherwise occupied he plotted sneaky deeds of revenge for imagined slights. He was also slightly plump and had an aversion to sheep and to climbing hills. Nobody liked this other Englishman. Small wonder – in addition to the prophecies and plots, he was conceited beyond endurance and his prophesies never came true anyway.

During his incarceration, the bad Englishman observed the well-balanced Englishman through a keyhole. He watched as the well-balanced one went about his life, never ruffled, always on an even keel. The bad Englishman watched as the well-balanced one acquired a lovely wife and entertaining friends and saw how he managed all the difficulties that life throws up. The bad Englishman’s wings were cramped and he needed exercise and he didn’t like what he saw but gradually, over the years, things got better. He observed that the well-balanced Englishman’s smile was getting tighter and that his life, although superficially almost perfect, was shrinking to a set of duties and habits and that his wife had lost the springy step which had formerly made her so alluring. But then, inexplicably, the bad Englishman was seized by a sense of pity for his captor, a sort of dragonish Stockholm Syndrome. With no distractions to divert him from it, the pity grew into an over-powering emotion until he could bear it no longer. One day, in a sudden passion, he forced the lock on the cupboard, slamming it open. He spread his dragon wings in the rather cramped hallway and twitched his long serpent tail.

The well-balanced Englishman came running from the kitchen where he had been eating his muesli and thinking about the work he had to do that day. He was feeling tired and a little run down.

‘I’m here to save you,’ said the bad Englishman with a smirk, which was the closest he could get to a genuine smile. ‘Fly away with me to some tropical island – my dragon wings are strong enough for two. We’ll drink fermented coconut milk and try it on with the local girls.’

‘At last,’ he said. ‘It’s been fifteen years and Jessica has been getting worried. She’s been enquiring after you, haven’t you, dear? “What’s he doing in there?” you keep saying.’

The bad Englishman stopped twitching his tail. He was a little non-plussed.

‘The local girls were just a thought,’ he said.

‘Of course we’ll fly away with you,’ said the well-balanced Englishman, ‘and in case you hadn’t noticed, Jessica’s sister is in the cupboard opposite. Well, you couldn’t have noticed unless you can see through doors. She wears a fiery crown and fishnet stockings. She’ll come too. We’ll make a foursome.’

And with that the well-balanced Englishman stepped forward and embraced the bad one and before Jessica’s astonished eyes the two of them seemed to fuse together so that she could no longer tell which one was which. Was it her well-balanced husband but with dragon’s wings who emerged or was it the bad Englishman but with a pleasant smile? Either way, it was a bit of a relief although she couldn’t think why.

She opened the cupboard door in the opposite wall.

‘You can come out now,’ she said and out stepped a tall, imposing woman with a fiery crown on her head, a very short skirt, fishnet stockings and far too much make-up.

‘Are those dragon’s wings?’ asked the tall woman, looking across at the combined Englishmen.

‘You’d better steel yourself for some cognitive dissonance, junior.’

‘And why would that be?’ Jessica remembered why she locked her sister in a cupboard in the first place.

If you enjoyed this piece, please share the link with your friends and acquaintances.