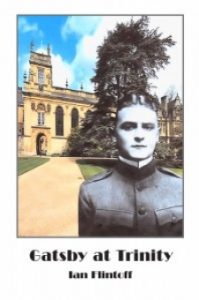 An excellent review in the Oxford Times, 18 January 2018 by Christopher Gray of Ian Flintoff’s novel, Gatsby at Trinity, production and distribution by YouCaxton Publications:

‘THE television showing over Christmas of the excellent 2013 film version of Scott Fitzgerald’s The Great Gatsby with Leonardo DiCaprio (and an even better Tobey Maguire) prompted me to take out a book that had languished some months in my ‘waiting to read’ pile. This was Gatsby at Trinity (Pitchfork Production, £9.99) by the Oxford-based actor, writer and director Ian Flintoff – and what a delight it proved. Impeccably researched and elegantly written, the novel traces the mysterious millionaire’s formative years, after First World War service in the US army, as an undergraduate at Oxford University. His student days are, of course, alluded to in The Great Gatsby, though it is never entirely clear whether they were pure invention. Gatsby certainly convinced the sinister character Meyer Wolfsheim. Who can forget his observation: “He’s an Oggsford man. He went to Oggsford College in England. You know Oggsford College?” The college in fact was Trinity, alma mater to Ian Flintoff too. Tom Buchanan, supercilious about Gatsby’s claim in The Great Gatsby, is shown a photograph of Jay in Trinity Quad – “the man on my left is now the Earl of Doncaster”. We get to meet the aristocrat as Lord Cusworth, one of Gatsby’s college companions, in Gatsby at Trinity. It turns out that it was his expression “old sport” that came to be borrowed by Gatsby. “Where’d you pick that up?” Tom asked him in The Great Gatsby, but answer came there none.

In the prequel we learn from Lord Cusworth that he employs the device as a means of disguising the fact that he has forgotten someone’s name. “Nobody’s offended and the old memory gets a decent break for a change.” Highlights of the novel (and Gatsby’s Oxford social life) include a ball at Blenheim where guests include Bernard Shaw, Noel Coward and Edward Elgar.